The specification describes a complete door controller. One small part of it - the window lift unit - is modelled here. In fact only the opening of the pane was realized. The closing part is very similar and was left out to make it easier to follow the example. Unfortunately the specification is available in German language only. Therefore the window lift related parts are presented below in English.

Besides showing how the requirements are transfered into a state machine it also shows how to integrate a state machine into a real-time operating system. In this example the Windows emulation of embos from Segger was used.

The movement of the pane is controlled through keys in the car doors. Pane movement continues as long as the stimulus is present or the pane has reached its end-position (either open or close). While closing the pane it is controlled if a barrier disturbes the movement. If yes, the closing operation is stopped and the pane is opened totally (clamping protection).

In reality the number and kind of stimuli depends a lot on the car type. Here the implementation of just one type is shown.

When receiving an opening command the opening starts if the battery voltage is above 10V. Below this level a “LowBatt” message is sent to the central control unit.

The following cases needs to be considered for moving:

If the command is “pane down manually” the pane will be moved downwards. Downwards movement will be stopped under the following conditions:

When receiving the command “pane down automatically” the pane will be moved downwards until it is completely open. Downwards movement will be stopped under the following conditions:

The figure below shows a possible state chart of the window lift. 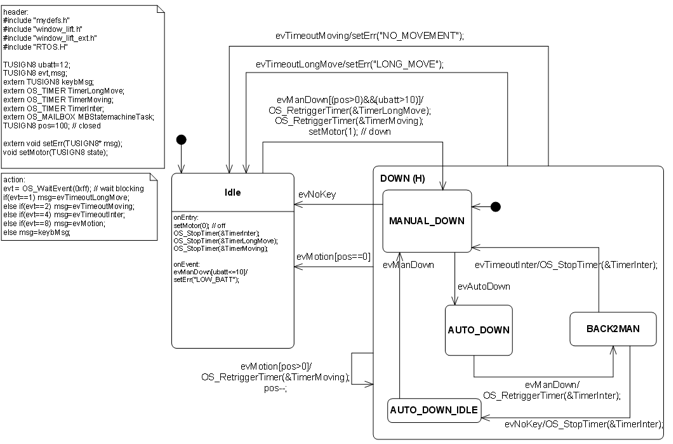 The generated state machine is executed in an embos task. Therefore it blocks until an event was recieved. Embos provides several mechanisms for inter task communication. In the example events were used to signal timeouts, pane movement and new key commands. The event selection code is specified in an 'action:' note (see image at the top). The action code is executed at the very beginning of the generated state machine function.

Important! SinelaboreRT does not restrict you in any way on how to send events to a state machine.

The motor is simulated in a second task (see motor.c / motor.h). If the motor is switched 'on' the task sends evMotion events every 20ms. As long as the motor is 'off' the task is suspended and does not send events.

For the supervision timers (long move, moving, inter) embos software timers were used. In their callback functions they simply send the according timeout event to the state machine task.

A third task realizes a small test bed by sending commands like (manual down, auto down, …) to the state machine. Several test cases are realized to test the machine. For example entering the manual mode from the auto mode. Another test case tests the 'long movement' requirement.

The example comes pre-built. The executable start.exe can just be started. If started it does not display any output but writes its output to trace.txt which is located under c:\. After execution all test cases (takes about 30s) the program finishes automatically. 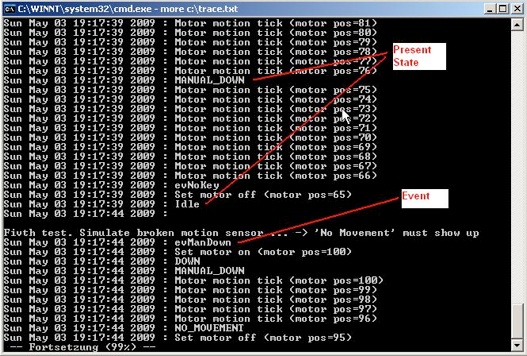 File main.c contains the simulation - and the state machine task as well as the code to initialize all tasks, timers etc. In files motor.* the simple motor simulation was realized. All files starting with window_lift.c/h were automatically generated from the state-chart window_lift.cdd. In folder embos the Visual C++ project as well as the embos library can be found.

To rebuilt the executable file you have to install Microsoft C++ 2005 Express Edition (or later) which you can download from Microsoft.

Thanks to the people from Segger allowing us to use the windows evaluation version of embos in this example.

If you have comments or questions just send an email to info@sinelabore.com.