Many embedded systems are likely candidates for implementation as finite state machines. A system that must sequence a series of actions or that must handle inputs differently depending on the mode it is in is often best implemented as a finite state machine. Typical examples are control-logic-oriented applications such as metering, monitoring, and control applications.

SinelaboreRT focus is on generation of readable and maintainable code from flat or hierarchical UML state machine diagrams. With its unique features the tool covers perfectly the requirements of embedded real-time and low-power application developers coding in C / C++. The generated code is independent of CPU and operating system. For IoT applications where parts of the application are implemented in Java / Python / C# / Lua / Rust or Swift, the code can also be generated in these languages. A payback is usually given already immediately.

Use your existing favourite modelling tool and generate code from it with an easy-to-use command line tool. Or use the built editor to create state machines within minutes. Automatic model checks warn from design flaws. Configure the generation process according to your needs. Simulate your model. Generate trace code automatically if needed. All major state diagram features like hierarchical states, regions, history, sub-machines … are supported.

Download & Try it! There are examples for various UML modelling tools and target languages for having a quick start.

Linux, and macOS and can generate source code targeting virtually any platform. By generating code that compilers basically on any compiler and the ability to integrate with your existing IDE, build process, or continuous integration system, the code generator can quickly be incorporated into any project. The codegenerator can be configured by a plain text configuration file which allows customization of generated code to exactly your needs.

Improve Developer Productivity: Avoid bugs that can waste countless hours of developer and end-user time before they are found. Developers spend a lot of their time coding state machines by hand.

And have to do it whenever the design changes. Sinelabore avoids the error-prone and tedious hand-coding by generating high-quality source code directly from the state machine design document.

It does not use an internet connection and will never collect nor submit data, code, statistics, analytics, or any other information from your system over any channel.

Generate code in the shortest time

To get an impression of the powerful capabilities of the tool download the demo version. Checkout the examples folder to see the generated code. Follow the “Getting Started” pages on this website. The manual contains a basic introduction into state-machines in case you need a refresh. Read the sections related to your UML tool and the language backend you want to use. If no UML tool is already in place take a look at the built in state machine diagram editor.

To run the code you have two options.

Customers and what customers say

“Sinelabore has helped me implement the behavior of a complex, asynchronous system. All the UML 2 elements I needed are available. I like that I don’t have to draw the state machine, then separately implement it and keep these two synchronized; this saves me time and reduces the potential of bugs. The error checking to make sure the state machine is valid is also useful. —- Daniel Bedrenko / Software Developer @ BPS…tec GmbH”

“Thank you again for providing such great tool!”

“We like Your Tool, infact we will give intro for another local company next week.”

Reactive systems are characterized by a continuous interaction with their environment. They typically continuously receive inputs (events) from their environment and − usually within quite a short delay − react on these inputs. Reactive systems can be very well described with the help of state machines. State machines allow to develop an application in an iterative way. States in the state diagram often correspond to states in the application. The resulting model helps to manage the complexity of the application and to discuss it with colleagues from other departments (and domains). Details can be added step by step during the development. Even during creation, the Code Generator can check the state diagrams for consistency (Model Check). Its logic can be simulated and tested. This ensures that the state machine behaves as intended. State machines are very useful for control-oriented applications where attributes such as reliability, code size, power consumption, and real-time behavior are particularly important.

There are different ways how to integrate state machines in a specific system design. Some design principles are more applicable for developers of deeply embedded systems. Others more relevant for developers having not so tight resource constraints.

The SinelaboreRT code generator supports you in the creation of the state based control logic. Generated code fits well in different system designs. The code generator does not dictate how you design your system. Therefore it is no problem to use the generated code in the context of a real-time operating system or within an interrupt service routine or in a foreground / background system.

Using state machines in a main-loop

In this design an endless loop — typically the main function — calls one or more state machines after each other.

It is still one of the most common ways of designing small embedded systems. The event information processed from the state machines might come from global or local variables fed from other code or IRQ handlers. The benefits of this design are no need for a runtime framework and only little RAM requirements.

Using state machines in a main loop with event queue

This design is like the one presented above. But the state machine receives its events from an event queue. The queue is filled from timer events, other state machines (cooperating machines) or interrupt handlers.

A minimal runtime framework for C is available here: https://github.com/sinelabore/examples/tree/master/lib

It offers timers and queues. The intended usage is as follows:


As indicated in the figure above also other state machines or interrupt handlers might push events to the queue of a state machine. An example how to do this is shown below.

In low power system designs a key design goal is to keep the processor as long as possible in low power mode and only wake it up if something needs to be processed. The design is very similar to the one described above. The main difference is that the main loop runs not all time but only in case an event has happened. The timer service for the small runtime framework is handled in the timer interrupt.

A skeleton for the MSP430 looks as follows:

A skeleton for the MSP430 looks as follows:

The following temperature transmitter using a MSP430F1232 header board with just 256 bytes of RAM and 8K of program memory is based on this design principle. 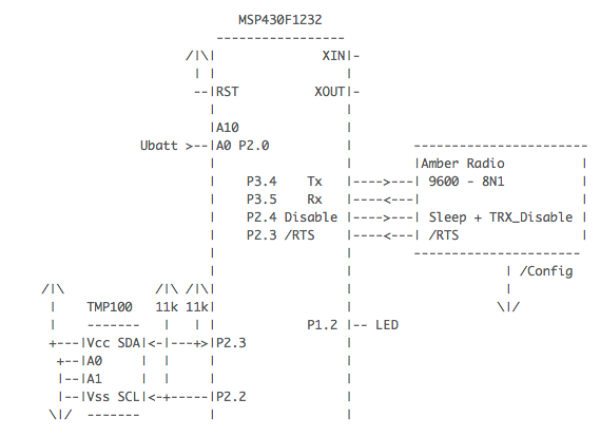 For more information on how to use state-machines in low-power embedded systems see here and here.

Using state machines in an interrupt handler can be useful in any system design.

For code generation some considerations are necessary. Usually it is necessary to decorate interrupt handlers with compiler specific keywords or vector information , etc. Furthermore interrupt service handlers have no parameters and no return value. To meet these requirements the Sinelabore code generator offers the parameters StateMachineFunctionPrefixHeader, StateMachineFunctionPrefixCFile and HsmFunctionWithInstanceParameters.

The example below shows an interrupt service routine with the compiler specific extensions as required by mspgcc.

To generate this code, set the key/value pairs in your configuration file the following way:

If the prefix of the interrupt service routine requires to span more than one line the line break ’\n’ character can be inserted as shown below:

Prefixes for the header and the C file can be specified separately.

In this design each state machine usually runs in the context of an own task. The principle design is shown in the following figure.

Each task executes a state machine (often called active object) in an endless while loop. The tasks wait for new events to be processed from the state machine. In case no event is present the task is set in idle mode from the RTOS. In case one or more new events are available the RTOS wakes up the task. The used RTOS mechanism for event signaling can be different. But often a message queue is used. Events might be stored in the event queue from various sources. E.g. from within another task or from inside an interrupt service routine. This design can be realized with every real-time operating system. Only the event transport mechanisms might differ.

In the how-to section an example of this pattern is presented with FreeRTOS. The examples below shows code for the RTEMS and embOS.

Sinelabore supports two basic modes of operation. Either the generated state machines react on events. Only if an event is present a transition is taken (e.g. evDoorClosed, evButtonPressed). Events are eventually send to the state machine using an event queue (see above). Alternatively transitions are triggered by boolean conditions. If a boolean condition is true a state change happens (e.g. DI0==true). The latter one is useful if binary signals should be processed like shown in these two designs (signal shaping function blocks)(PLCOpen function block). In this case the state machine runs without receiving a dedicated event. Based on the current state, conditions derived from boolean signals are used to trigger state transitions.