Entering multi-line action code in EA Entering multiline action code (entry / exit / do) for a state was so far limited to one line. The action name was used as code. Now the code can be entered into the behavior field of an action. See the figure above for an example of two lines of entry code.

So far the code generator used a “depth first” method to find test routes (call the codegen using option -c). The used algorithm generates test routes that are as long as possible. The benefit is that usually fewer but longer routes are generated. The figure on the right shows the Safety Function Block test routes as a tree. You can see how deep this tree is which corresponds to the longest test route. 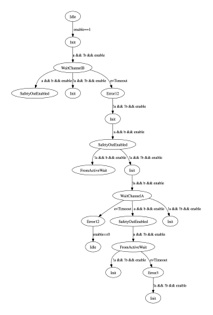 An additional new algorithms is available now (call the codegen using option -c1). It uses a 'breadth first' algorithm to find test routes. It begins also at the init state and explores all the neighboring states first. Then for each of those nearest states, it explores their unexplored neighbor states, and so on, until 100% transition coverage was reached. The result are shorter but typically more test routes. The following tree shows again the PLC Open Safety Block test tree but now generated using the new algorithm. You can see that the tree is much broader - i.e. there are more test routes to go. But at the same time the routes are much shorter.

It is up to you which algorithm to use. A tester might probably find the shorter routes easier to understand.

Sub-machine states hide the complexity of a state from the viewer. A double click on the state opens the internals of this state. From the code generator point of view a sub-machine is a normal state with children. There is absolutely no difference compared to a normal hierarchal state. Take a look into the manual to find out more about the use of sub-machine states. 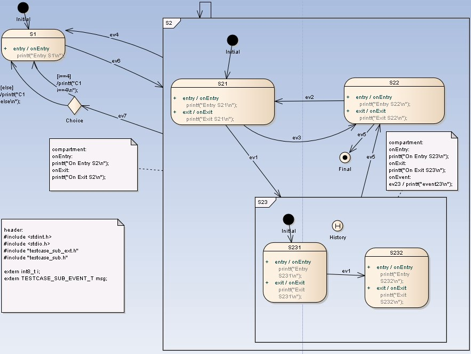